Say it in song!

Everything you need to know about intermolecular forces summed up in a catchy tune.

So far, we have been talking about intramolecular attraction, or attraction within a molecule. But, obviously, molecules don't tend to come in a party of one. When you look at a chair, you aren't looking at a molecule, you're looking at a chair. So, then, we need to talk about another type of interaction if we want to really understand the universe. This is called intermolecular attraction and is what holds a group of molecules together.

There are several types of intermolecular bonds that can form, as described below.

Ionic bonds are a kind of weird mashup between an intramolecular bond and an intermolecular bond, so I'll include it here, but it's really nothing new. Everything you need to know about ionic bonds can be learned from the past sub-lesson on the topic.

Take a look at this picture of a water molecule: 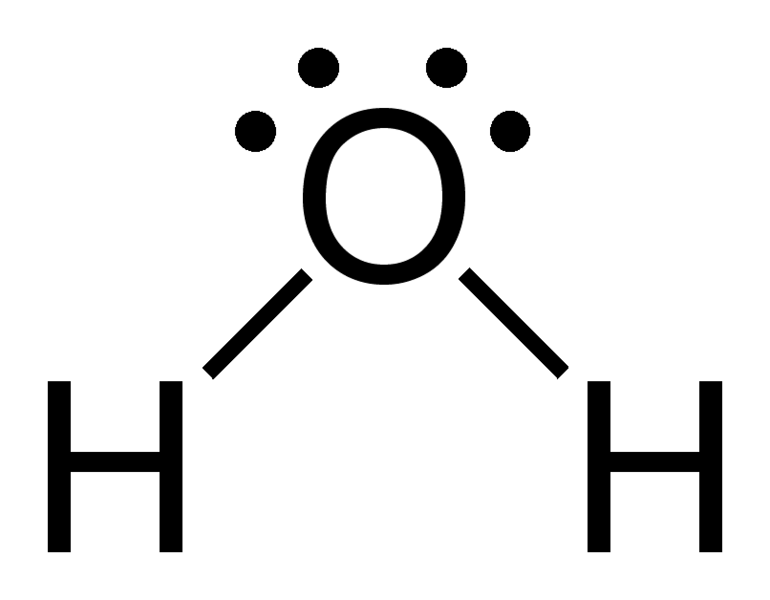 Water is polar. This means that it has a negative end and a positive end. Going back to the picture, you can see that one end of the molecule has free electrons (those dots). As you know, electrons are negative. So, the end of water with free electrons must also be negative. The other end of the molecule is bonded to hydrogen. Hydrogen has protons, and protons are positive. So, that end of water must be positive (at least compared to the other end). While this explanation of why water is polar is true, it is not complete. The concept of how intermolecular attraction works is related to a concept called electronegativity. Electronegativity is a fancy word for how much atoms want to have electrons. Oxygen is more electronegative than hydrogen. In other words, it is an electron-hog. It's greedy. It will pull the electrons away from hydrogen and towards itself. And, again, since electrons are negative, this makes the oxygen atom slightly more negative than the hydrogen atoms. (This phenomenon, where a molecule becomes charged because of electronegativity, is called a dipole moment). Cool, no? By now, I'm sure you must be thinking, "That's great, but what on earth does this have to do with how molecules stick together." Well, since water has a negative end and a positive end, and opposites attract, the positive end of one water molecule is attracted to the negative end of another water molecule, and the two molecules stick together! Amazing! This general interaction, where the negative end of a polar molecule sticks to the positive end of another, is called a dipole-dipole interaction. This is because the "positive end" and the "negative end" of a molecule are called dipoles (see the word pole as in polar in there?). It can occur between any polar molecules, not just water. In fact, the attraction in water is actually a special kind of dipole-dipole interaction called hydrogen bonding. You'll hear this phrase a lot later on because it is important to life. Most substances that have this interaction are usually gasses or liquids at room temperature. This implies a very low melting and boiling temperature. Note: this type of interaction is somewhat similar to an ionic bond in that charges are interacting to hold stuff together. But, it is important to differentiate between the two. In an ionic bond, the whole molecule is charged, and it interacts with another molecule with a whole (opposite) charge. In this case only part of the molecule is charged, so it can interact with other molecules of the same type.

As mentioned, hydrogen bonding is a special case of dipole-dipole interaction. However, hydrogen bonds are much stronger than dipole-dipole because the hydrogen atom is virtually left “naked”—it only consists of a proton (no unshared electrons). This makes it even less negative than the other end (and therefore even more positive), so it will stick to the negative end of other molecules better than other atoms might. In other words, there is no shielding effect, or no electrons to get in the way of the positive-negative dipole interaction. As you may have guessed from the name, hydrogen bonding always involves hydrogen (because it's the only atom that will never have unshared electrons, on account of having a full valence shell with 2 electrons). It's negative counterpart will always be a highly electronegative atom, like N, O, or F (hint: the closer you are to fluorine on the periodic table, the more electronegative you are). This is because, as described in the dipole section, these elements will pull electrons towards themselves more than any other element, making the molecule the most polar (negatives more negative and positives more positive, meaning stronger interaction between the two!).

London dispersion forces are very weak, and occur between neutral (uncharged), nonpolar molecules. They, like the other types of intermolecular attraction, rely on positive and negative charges interacting. However, unlike the other types of intermolecular attraction, these charges are not permanent (hence why London dispersion forces are weak). To understand this, we must take a step back to the structure of the atom. Electrons are not stuck in place. This is one of the fall-backs of drawing models on paper--we can't see the motion. But, in reality, motion does occur, and, in fact, it occurs quite a lot, and quite fast. Electrons are always moving. ALWAYS. What does this mean in terms of intermolecular attraction? It means that electrons, just by chance, can end up on one side of a molecule just by chance. They won't stay there forever, but for this fleeting moment, the molecule is polar--one side is negative, leaving the other positive and stripped of electrons. So, in this fleeting moment, it can stick to another molecule, which also happens to have a dipole at this moment in time. The odds that this would happen may seem pretty small and insignificant. Really, what are the chances that, say, 40 electrons in a molecule end up on the same side of the molecule at the same time, and in close proximity to another molecule which also just happens to have 40 electrons on the same side of the molecule? Fat chance, right? This is just a guess, but the odds are probably greater that you will win the lottery, buy out an NFL team, and watch them win the Super Bowl 5 years in a row. (Okay, maybe it's not that rare, but you get the idea). So, how can this possibly be a significant source of intermolecular attraction? Well, you have to remember that there are billions upon trillions of molecules even in a small amount of volume. (For example, if molecules were the size of cupcakes, 18 mL of water would fill approximately 12 billion trillion Olympic-sized swimming pools). This means that even though it might be almost unheard of for any two given molecules to be held together by London dispersion forces, there are actually not that uncommon if you look at the entire volume of substance. So, yes, they're weak, but they do occur, and sometimes in very significant ways. In fact, it's what allows a gecko to climb up glass. Note: this is a bit of a simplified view of dispersion forces. In reality, not all of the electrons have to be on the same side of the molecule at the same time (just most of them). Also, molecules can induce a dipole in other molecules, making it more likely that dispersion forces will occur. But don't worry about all the details of how this works (at least at this point in your chemistry career ☺).